You Are Here: We decipher key principle behind reaction of metalloenzymes

We decipher key principle behind reaction of metalloenzymes

What enables electrons to be transferred swiftly, for example during photosynthesis? An interdisciplinary team of researchers has worked out the details of how important bioinorganic electron transfer systems operate. Using a combination of very different, time-resolved measurement methods at DESY's X-ray source PETRA III and other facilities, the scientists were able to show that so-called pre-distorted states can speed up photochemical reactions or make them possible in the first place. The group headed by Sonja Herres-Pawlis from the RWTH Aachen University (RWTH) Michael Rübhausen from the University of Hamburg and Wolfgang Zinth from Munich’s Ludwig Maximilian University, is presenting its findings in the journal Nature Chemistry. 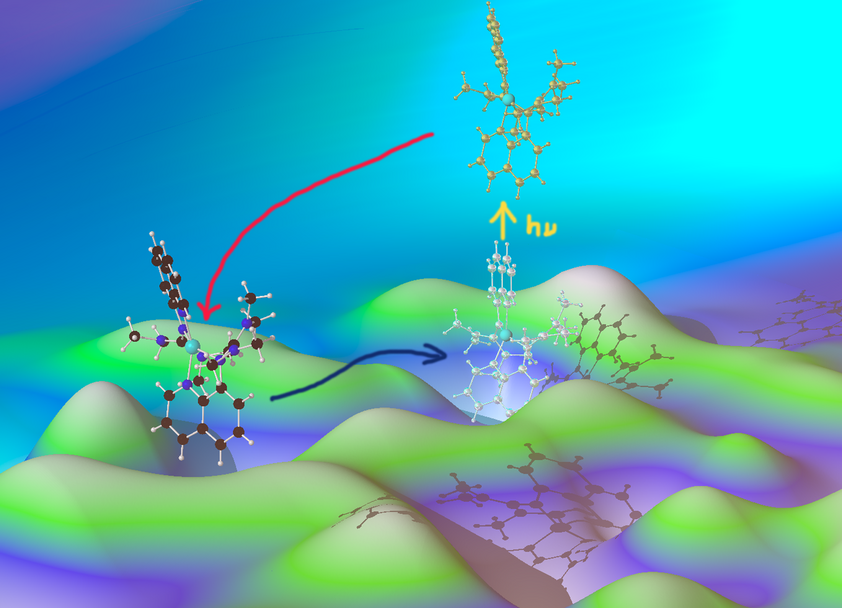 Entatic state model complexes optimize the energies of starting and final configuration to enable fast reaction rates (illustrated by the hilly ground). The authors demonstrate that the entatic state principle can be used to tune the photochemistry of copper complexes.

The scientists had studied the pre-distorted, “entatic” state using a model system. An entatic state is the term used by chemists to refer to the configuration of a molecule in which the normal arrangement of the atoms is modified by external binding partners such that the energy threshold for the desired reaction is lowered, resulting in a higher speed of reaction. One example of this is the metalloprotein plastocyanin, which has a copper atom at its centre and is responsible for important steps in the transfer of electrons during photosynthesis. Depending on its oxidation state, the copper atom either prefers a planar configuration, in which all the surrounding atoms are arranged in the same plane (planar geometry), or a tetrahedral arrangement of the neighbouring ligands. However the binding partner in the protein forces the copper atom to adopt a sort of intermediate arrangement. This highly distorted tetrahedron allows a very rapid shift between the two oxidation states of the copper atom.

“Pre-distorted states like this play an important role in many biochemical processes,” explains Rübhausen, who works at the Centre for Free-Electron Laser Science (CFEL) in Hamburg, a cooperation between DESY, the University of Hamburg and the Max Planck Society. “The principle of the entatic state helps the electron transfer reactions that occur everywhere in nature and also in human beings, for example when we breathe or a plant photosynthesises,” adds Herres-Pawlis.

Biologically relevant, pre-distorted states always involve a metal atom. The scientists examined a model system consisting of a copper complex with specially tailored molecules bound to it, so-called ligands. Using a wide range of observation methods as well as theoretical calculations, the scientists showed that the ligands used did indeed put the copper complex into a pre-distorted (entatic) state and were then able to observe the details of the reaction that occurred when light was absorbed.

The combination of time-dependent UV, infra-red, X-ray and visual fluorescence spectroscopy produces a detailed picture of the dynamics of the structural changes on a timescale of pico- to nanoseconds (trillionths to billionths of a second). “We are now able for the first time to understand how pre-distorted states favour charge transfer,” explains Rübhausen. “Also, our studies demonstrate that pre-distorted states are important for photochemical reactions, in other words for certain biochemical processes which are triggered by light,” explains Herres-Pawlis.

The study shows in detail how the process proceeds: from the initial state (copper in an oxidation state of +1) an electron is transferred from the copper to one of the ligands, by optical excitation. Within femtoseconds (trillionths of a second) the excited state created decays into another, still excited state, known as the S1 state. In this configuration, the geometry is slightly relaxed.

Shortly afterwards, the electron undergoes a change in spin. The spin of an electron is comparable to the direction in which a top rotates. Although one of the electrons has so far remained on the ligand, this electron and its corresponding partner on the copper were spin-coupled. The spin of the electron on the ligand now reverses, and this very rapid transition to the so-called triplet state, within just about two picoseconds, removes the spin coupling. This T1 state exists for 120 picoseconds and drops back into the original state again after once again reversing its spin. All the time constants are distinctly shorter compared with other copper complexes. “A complete understanding of all the processes taking place has only become possible through the unique combination of different methods of study,” emphasises Zinth.

The detailed analysis of the reaction principle not only improves our understanding of natural processes. It can also help to customise new bioinorganic complexes that imitate nature but whose range of reactions extend beyond those of natural molecules. These complexes could also accelerate or make possible chemical reactions associated with electron transfers in other areas, too.

Scientists from the University of Hamburg, RWTH Aachen University, the Ludwig Maximilian University in Munich, DESY, the University of Paderborn, the European research facility ELI Beamlines, the Institute of Physics of the Czech Academy of Sciences, the University of Uppsala, the Chalmers University of Technology in Göteborg, European XFEL and the Danish Technical University were all involved in the research. The study received grants from Deutsche Forschungsgemeinschaft as part of the dislocated research group FOR1405 (Dynamics of Electron Transfer Processes within Transition Metal Sites in Biological and Bioinorganic Systems) and the SFB749 (Dynamics and Intermediates of Molecular Transformations) and the cluster of excellence CIPSM.

The article Transferring the entatic state principle into copper photochemistry is available on the webpage of the publisher.